A performance and short film project commissioned by /TheRules exploring the Algonquin concept of Wetiko – a psycho-spiritual disease that takes hold of the mind and soul, driving the host to greed, excess and selfish consumption, cannibalising the life force of others for selfish gain. We were one of eight artists/collectives from around the world exploring wetiko for a ‘starburst’ of creative imagination. See the whole project here.

Giant inflatable cubes journey through diverse landscapes, revealing and reflecting wetiko in its various manifestations. Filled with invisible air made visible by the limits within which it is contained, the cubes are an open-ended exploration in embodying and revealing the invisible, while hinting at the limits ignored by the growth economy that is underpinned by wetiko. On their journey, the cubes are ejected from private shopping centres, bulldozed by impatient car drivers, and finally seen as tools of resistance and solidarity – of collectively seeing wetiko – in mass protest, before being subsumed back into the earth.

Living Wetiko reveals the stories of people living with the consequences of wetiko. Dispossessed people of La Guajira Colombia, resisting extermination by the Cerrejón coal mine – owned by UK-listed BHP Billiton, Glencore and Anglo American and funded by UK tax payer money – give testimonials of the lived reality of wetiko. Featuring testimonials from Jakeline Romero Epiayu of the Sutsuin Jiyeyu Wayuu and Samuel Arregoces of the Black Ancestral Community Council of Tabaco.

When bankers, speculators and those with power roll the invisible dice of wetiko for high-risk, high reward play in the casino of capitalism, they gamble with all of our lives. The dice of wetiko roll, but whichever side they land on we all lose. By inflating the dice to become ultra-visible, and inviting the public to roll them, we can reveal and change the rules of the game. Filled with invisible air made visible by the limits within which it is contained, the cubes – here appearing as dice – are an open-ended exploration in embodying and revealing the invisible, while subtly hinting at the limits ignored by the growth economy. 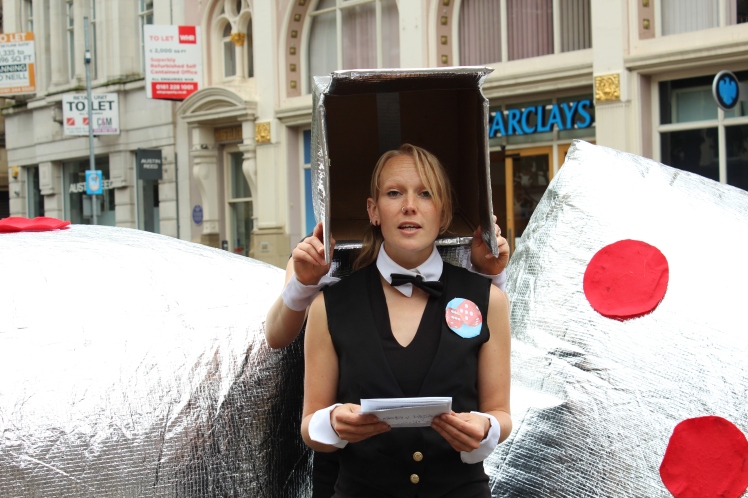 Members of the public rolled the dice to allow chance to dictate elements of what followed, exploring climate change, terror and war, and social division as manifestations of wetiko and symptoms of neoliberal capitalism.

The corporate media inflates these threats with sensationalism, while politicians use them to manipulate fear for use as a political tool. What effect does this inflation of fear and the perception of risk have on us individually and collectively? How the story is told has an effect. These stories were told through the lens of the media through physical performance before arranging the dice to create intimate temporary spaces for live storytelling. Grassroots activists shared stories of their experiences of collectively seeing wetiko. When we see wetiko, our interdependence is revealed, galvanising resistance to exploitation and empowering life-affirming action and solidarity. The audience was then invited to share their own stories of seeing wetiko, and draw them on a blank dice to create a collaborative expression of seeing wetiko.

Finally, the dots on the dice were joined together. When we connect the dots and see what lies beneath the traumas of our times – climate change; war; racism and xenophobia; privilege and consumption based on the exploitation of others; neocolonialism; inequality – we see they are linked. Intertwined by an economic system based on greed and exploitation, fundamentally underpinned by wetiko. When the dots were connected, each dice revealed a letter, together spelling WETIKO and blockading the street, challenging bypassers to stop, to look, to see wetiko.